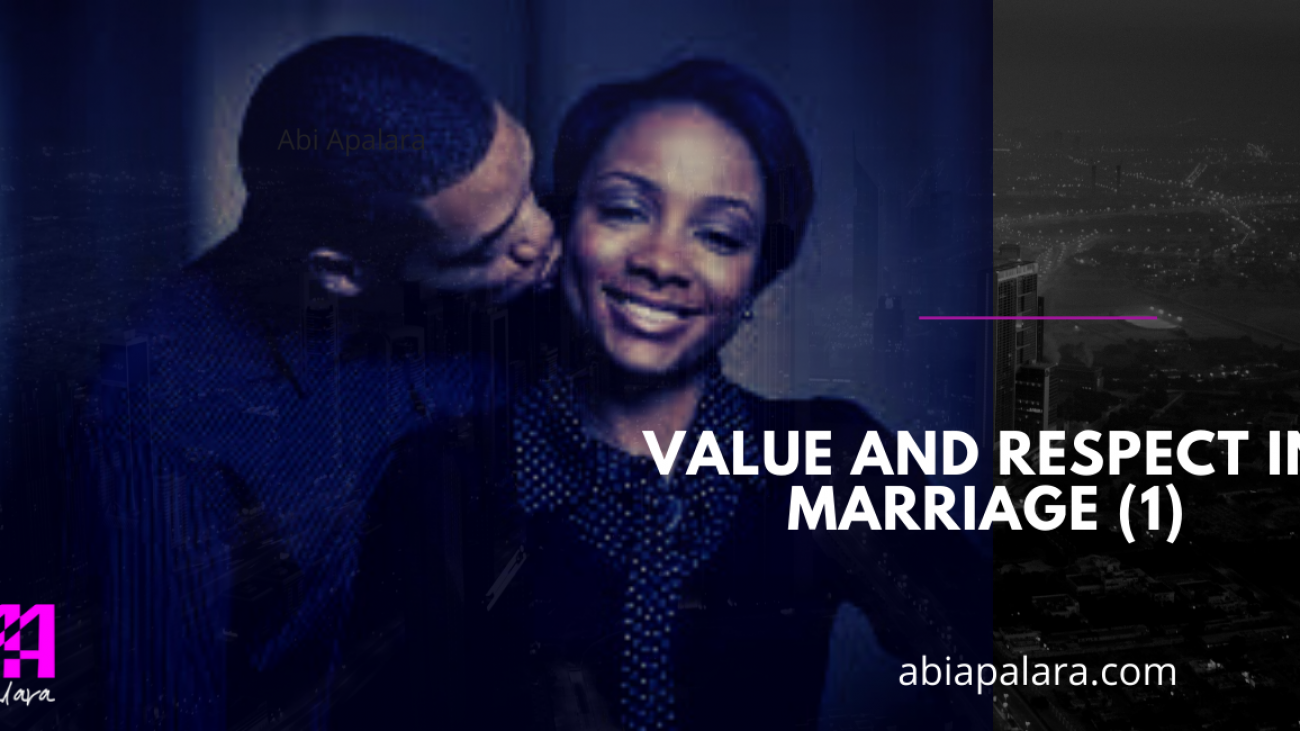 by Abi Apalara
Value and Respect

Value and respect go hand in hand, most people who are highly respected are people who are valuable to society. They have earned that respect by the body of works they have done, either academic achievements or philanthropic or even just being good mentors due to their wealth of experience and sharing that experience with other people. Value attracts respect and value commands respect. In a marriage, one the most important need of a man is respect, God knows that when he created man and put that craving in his heart.

However, God also commanded man to work, he commanded him to love his wife and not to provoke his children, these will ensure a man becomes a man of value and therefore becomes a respectable person. There are three areas in a man’s life which are significant but when they are not properly handled, can erode the respect and adoration, man craves so desperately. I want us to examine these three areas to reveal how a husband can erode respect or fail to command respect in his marriage.

Matthew 5: 13 says “You are the salt of the earth, but if salt has lost its taste, how shall its saltiness be restored? It is no longer good for anything except to be thrown out and trampled under people’s feet. A man that does not have self-respect will find it hard to be respected by other people, including his wife and children. As a man and husband, you are automatically in a position of respect. There are actions and behaviours that ensures a man maintains and commands respect, he is treated with respect because he has self-respect. For example, having a means of livelihood, being able to provide for and protect his family, behaving in a respectable manner and so on. A man who does not have a means of livelihood and he is not trying to make a living as a married man has already disrespected himself. A man who cannot provide for his family is worse than an infidel the bible says. A man who cannot handle a crisis, make a decision and keep his family in order without violence, has lost self-respect. An alcoholic or a man who is addicted to drugs, games, illict sex will eventually lose his self-respect. As a man, you must realise, your value is linked to your values and behaviours, hence you must be disciplined to guard yourself and preserve your self-respect. If you lose your self-respect, it will be difficult for other people including your wife to add respect to your life, just as it is difficult to restore salt’s saltiness if lost. It is therefore important to have self respect as a husband in order to be respected and valued in your marriage as it should be.

1 Timothy 3 is a summary of a respectable and valuable husband. “The saying is trustworthy: If anyone aspires to the office of overseer, he desires a noble task. Therefore, an overseer must be above reproach, the husband of one wife, sober-minded, self-controlled, respectable, hospitable, able to teach, not a drunkard, not violent but gentle, not quarrelsome, not a lover of money. He must manage his household well, with all dignity keeping his children submissive, for if someone does not know how to manage his household, how will he care for God’s church? There are so many points in the scripture above to be considered by any man who wants to be adored, valued and respected by his family.

The bible says he must be above reproach. A reproached is someone who has received criticism, disproval, or disappointing others that is justified by their actions. Sin brings reproach, any sinful action will bring reproach, therefore as a husband who deserves respect, you must choose to live a lifestyle free of reproach. When you embrace sin, then be ready to lose our respect. You cannot continue in sin and ask the grace of God to increase, sinful actions will erode your value in the face of God and also in the face of your wife, children and other people. A man of one wife means you are not looking elsewhere for love and satisfaction; you are investing in your marriage.

Once a man starts to cheat on his wife whether emotionally or physically, his value begins to depreciate. I want you to know as a man, that the marriage bed is sacred and undefiled, the moment you are crossing the line to engage in infidelity, then you are disrespecting yourself, your spouse and your marriage. You can no longer be adored and honoured and so you begin to lose your self-respect. God knows you will be tempted but he gave you a will and a choice and a way of escape. Violence is a very fast route to losing your self-respect, situations will occur in a marriage that will make you angry, but the choice to respond with violence is solely yours. When the bible says be angry but do not sin, he makes allowance for our emotions, yes, we can be angry but to be violent is sin and not of God. As a husband, realise your spouse can act in ways that will make you angry, you must, however, be disciplined, self-controlled and honourable enough to know, responding with violence means you will erode the respect and honour you want from your marriage. Learn how to handle tense situations, plan, prepare ahead of it happening and be aware you cannot afford to lose your dignity for mere arguments.

A good father respects his children

The bible admonishes fathers specifically in Ephesians 6:4 “Fathers, do not provoke your children to anger, but bring them up in the discipline and instruction of the Lord” and again in Colossians 3:21 Fathers, do not provoke your children, lest they become discouraged. This means a father can provoke his children. Please as a father, do not shout, scream or make your children respect you out of fear. Do you know that respect comes out of love and adoration? When you love your children, they will adore you, honour you and hold you in the highest esteem. Love for children means time and provision together. If you have no time for your children, but provides all the money they need, you will miss it. If you have time but unable to meet their basic needs, you will also miss it. You have to provide for their basic needs and spend time with your children.

They are judging you on your character, how you treat your wife and other people. The greatest mistake some men make is to maltreat their wives and expect their children to love and respect them. Your actions speak louder than your words. The best gift to a child is to be raised by two loving parents who love each other, as much as they love their children. Fathers respect your children, do not provoke them to anger by your actions.

The Lord Jesus has provided you with the best manual on how to be a respectable father, He loves and never forces His will on His children. God gives and gives out of the expression of His love for us, we come to fear Him and honour Him, not because he is an angry God but because He is a loving and forgiving God. Do not use fear to get your children to respect you, it may work for a while, but you will be provoking them to anger, which they will later turn on you when they are older. Respect your children, they have their minds, they are small people who deserve to be heard and respected. Don’t take away the dignity of your children because of your authority as a father, treat your children as our heavenly father treats his children.

Be loving and kind. Discipline them without violence, but gently instruct and admonish them. The best way you can teach and discipline your children is by being a role model to them. They see what you do and copy that quickly, more than what you tell them to do.

We will look at the third point in part 2 – A husband that respects his wife.